One of the best benefits of having our own dairy cow is the delicious, thick cream that she provides. Making homemade butter in a stand mixer is my favorite way to use it.

When our Jersey dairy cow was pregnant with her first calf last year, I dreamed of the milk that would be filling our fridge. I couldn’t wait to try my hand at different types of cheese and using it in many of my baking recipes.

But most of all, I couldn’t wait for the cream. The thick cream line of the Jersey is one of the main reasons I was drawn to that breed. And to cows in general versus having a dairy goat. And now we have lots and lots of heavy cream!

I use heavy cream in a variety of ways. Homemade whipped cream on delicious desserts, adding it to bisques and chowders to thicken them up, and fresh scones or biscuits for a warm breakfast. But above all, butter. Homemade butter just can’t be beat.

I thought I was going to have to purchase special equipment to make homemade butter. I mostly heard of others making it in their food processors, which I don’t have. Or buying an old fashion hand-cranked butter churn, which I would like to get eventually. But I wanted to start with what I had on hand without having to shake a jar for a really long time!

Then my friend and cow mentor mentioned using a stand mixer, which I do have, so I gave that a try and it worked great. It was so easy! Now I can make butter anytime in less than 20 minutes. Here’s how I make homemade butter in a stand mixer.

Equipment You Will Need

I have a traditional Kitchen Aid stand mixer and it works great for making butter. However, it is very messy. The pouring shield accessory helps but even that doesn’t block all of the milk that splashes while running the mixer on full speed. Draping a tea towel over the mixer to catch any wayward splashing does the trick.

I have since switched to using my Bosch mixer and it makes for a much cleaner experience. Because the lid covers the entire top of the bowl, no liquid splashes out. Both mixers do a great job making butter, though.

If you don’t have your own dairy cow, you should get one! But if that’s not an option, you might be able to find a source for local, raw milk in your area. Otherwise, organic, store-bought heavy cream will work too. I usually yield 1/2 cup (equivalent to 1 stick) of butter per 2 cups of cream.

The cream naturally rises to the top of the jar and is easy to see. Using a small ladle, you can gently skim the top of the cream off and pour it into a separate bowl.

The skimmed milk that is left can still be used for drinking, baking, and some cheese making so don’t discard it. I usually leave some of the cream when I’m skimming so that the milk isn’t too thin when I go to use it later.

I let the cream sit at room temperature for about a half an hour before I turn it into butter.

Kneading the butter requires using very cold water and this can be uncomfortable on your hands over several minutes. Also, even when cold from the water, our hands create warmth and can stick to the butter while kneading it.

I got a nice, wooden butter paddle and it makes kneading the butter a lot easier. My hands don’t ache from the cold water and I’m also able to press down on the butter more firmly to get all of the buttermilk out.

You definitely don’t need a butter paddle to make homemade butter but if you’re going to be doing it often, it’s a really nice accessory to have!

The buttermilk that collects in the bottom of the mixing bowl is old-fashioned buttermilk. This is not the same as the cultured buttermilk purchased at the store and unfortunately, they cannot be used interchangeably.

However, keep your old-fashioned buttermilk from your homemade butter in a jar in the fridge. This buttermilk can be used in place of water in most recipes including pancakes, waffles, bread, rolls, and other recipes.

Store homemade butter in your refrigerator as you would store-bought butter. Or you can freeze it for later as well. The cleaner you get your butter (the more buttermilk you squeeze out) the longer it will stay fresh in your fridge.

I like to keep some of our butter in a butter safe. This keeps the butter soft and spreadable for putting on toast or biscuits.

I go through butter so quickly in our kitchen because I am always using it. Whether we’re baking, cooking, or spreading it on bread, biscuits, or other treats, having homemade butter from the cream of our cow is amazing!

By subscribing to our newsletter, you consent to receive new post updates and occasional promotional emails related to our company. 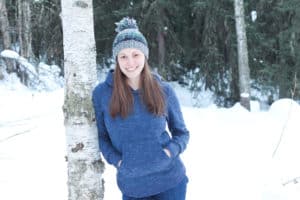 I’m Lisa, Alaskan born (but not raised) and now I’m back in the last frontier with my own family. Welcome to our little log cabin in the woods!